Top Ten Tuesday is currently hosted by Jana at That Artsy Reader Girl. This week’s topic is Genre Freebie: pick a genre and build a list around it. I chose to feature my top ten books with Jewish characters. And only ONE of them is a Holocaust story, because while we should never forget, there’s more to Jewish life and history than World War II. 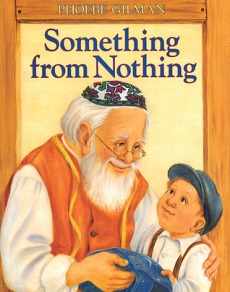 Something From Nothing by Phoebe Gilman

My memories of reading this story as a kid are of how enraptured I was with the illustrations, particularly of the shiny blue blanket material. That bedazzlement has not faded.

This book has SO MUCH going on. The main story, yes, but also the exquisite illustrations of the shtetl that show the stories of its inhabitants; the understated character actions like Joseph’s sister trying to comfort him with her own doll; the parallel story of the mouse family living under the house; the message about not letting materials go to waste (both in the main house and in the mouse house). There are relatively few words, but the incredible illustrations inspire several minutes of perusal before turning the page.

Also there’s an adorable panel of little mice children attending Hebrew school, and if that at least doesn’t get you to pick up this book, I don’t know what else to say. 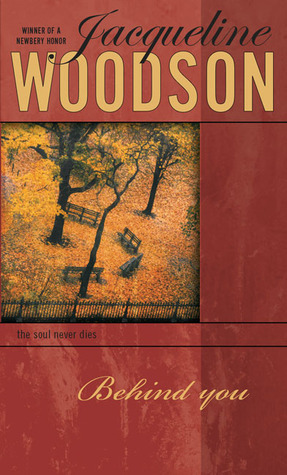 If You Come Softly and Behind You by Jacqueline Woodson

You know how sometimes the question goes around about the one book you’d want everyone to read?

This is it. If You Come Softly is my choice.

I first read this book in middle school and have never forgotten the impact it had on me. During my recent reread, I wasn’t just reading it through an adult lens, but through the lens of my 13-year-old self.

Even though this time I knew what happens, this book punched me just as much as it did so many years ago. Woodson’s utterly poetic writing pulls you in, wraps you tightly, makes your emotions soar, and drags them back down again.

This book deals with so many identities and dynamics: race, Jewishness, queerness, money, divorce, family, growing up, fitting in, the ways they all intersect. It explores so many relationships, multiple dimensions and types of each: siblings, parent/child, romantic couples, friends.

The more I think about it, the more I realize just how formative this book was to my younger self, especially on the stupidity and senselessness and wrongness of racism. Even when I was 13, I recognized the reality of the book’s ending. I hated it, wished the story could have ended differently, but never did I think it wasn’t realistic. And that’s what bothered me the most. That’s what still bothers me, because the depictions of racism are still staggeringly relevant today.

Woodson wrote a devastatingly impactful book that should be required reading for everyone.

The sequel, Behind You, is a stunningly beautiful, complex exploration of how the grief from a single event ripples out and affects so many people. It’s not often I spend the majority of a book in tears.

“His voice had a wonderful flow to it, and even the awful things he had to say were beautifully said.” This book in a nutshell.

It blew me away. You cannot “enjoy” a book about the Holocaust; that’s not the right word, not least because even though the characters are fictional, the horror of their stories is not. However, the juxtaposition of those stories with the fairytale of Sleeping Beauty creates a heart-rending, gut-punching, thought-provoking, powerfully meaningful and relatable MASTERPIECE. I often had to put the book down, breathe, and work through what I just read. I had to walk away between scenes in the last half of the book because it was so difficult, so intense to experience. The way Jane Yolen uses the tale of Sleeping Beauty as a way for Gemma to reconcile her past, the role the tale plays in the characters’ lives, how different characters hear and interpret it differently, how their expectations for it differ and what those reactions mean in relation to Gemma’s past…wow. Just wow. This book is truly in a league of its own.

This is a fantastic book. It is a loose retelling of Rumpelstiltskin, which apparently is antisemitic. I didn’t know that before I started reading about this book. But Novik turns this story into a Jewish-positive space, while also telling a fantastic fairytale with three main women characters who are utterly fantastic. They have different storylines, different backgrounds, but they’re all empowered in their own ways. All three women kicked ass, not in a literal sword-fighting way, but by knowing their strengths, taking confidence from that, and using it to navigate the obstacles in their way, even when—especially when—others didn’t see or didn’t value those strengths.

The Red Tent by Anita Diamant

This is a biblical story following Dinah from the Book of Genesis. It is a feminist retelling of her story and that of her mothers, the four wives of Jacob.

The only familiarity I had with this era of the Bible was Joseph and the Amazing Technicolor Dreamcoat. Even though it’s not a Christmas story, for some reason my family and I, when I was growing up, always went to see a stage performance of Joseph and the Amazing Technicolor Dreamcoat, which was always put on in December where we lived, so I always associated it with Christmas.

But what I didn’t know until I read this book and read more about this book is that Joseph had a sister. In the play and in the movie version with Donny Osmond, Joseph only has brothers. But apparently in the Bible he has a sister, who is completely ignored in all versions of the musical that I’m aware of, which is especially infuriating because it’s a crime that the brothers do to Dinah by murdering her husband that causes them to be cursed. So it was a little heart-wrenching to know that a story I grew up loving and seeing every year completely cut out both the sister and the multiple wives of Jacob.

But it was nice to have them focused on in this book, and the book was great.

Are You There God? It’s Me, Margaret by Judy Blume

I wish I had read this book when I was younger. I didn’t read it until a few years ago, but I absolutely loved it. This is a children’s/young adult book about a girl who comes from a half Jewish, half Christian family, so I saw myself represented in her and the issues that she deals with, not just on the religious side and the family side, but just the normal growing up as a 12 year old. I really enjoyed it and connected with it so much.

People of the Book by Geraldine Brooks

This book follows the story of the famed Sarajevo Haggadah throughout time. Half of it takes place in the present following Hanna, who is a rare book expert. The other half of the book takes place at different time periods following the journey of the book over the centuries. I actually liked the past time frames a lot better than I liked the present time frame with Hanna, but the way that Brooks weaves all those stories together was done really well.

The Golden Dreydl by Ellen Kushner

A fun book that’s geared more for a children’s audience but can be read by anyone. It is a short, Hanukkah-inspired fairy tale. The main character journeys to a magical world to save a princess. It’s really cute, and it is heavily Jewish.

The Golem and the Jinni by Helene Wecker

The book follows the non-human golem and jinni characters’ journeys among humans, learning about humanity and learning about themselves. It combines the Jewish folklore and magic of the Kabbalah, where the golem comes from, with the folklore and history from Syria, where the jinni comes from. It’s so good. This book had such a great atmosphere to it, and the setting of early 1900s New York with those characters was something I was able to dive into immediately. I really want to read it again because the author is coming out with a sequel at some point in the near future.

literally anything by Shira Glassman

I have read a couple of her novels and a couple of her short stories. Her novels in the Mangoverse series are light, fluffy, Jewish, queer fantasy that are just so fun. And her short stories cover different types of relationships and different time periods. Some are ghost stories, some are contemporary stories, some are short fluffy Hanukkah stories. They’re great, and I can’t recommend her enough.

And those are my top ten books with Jewish characters! For more Jewish books, check out my shelf on Goodreads. Let me know down in the comments if you’ve read any of these books and what your thoughts on them are. What are your favorite Jewish-inspired books?