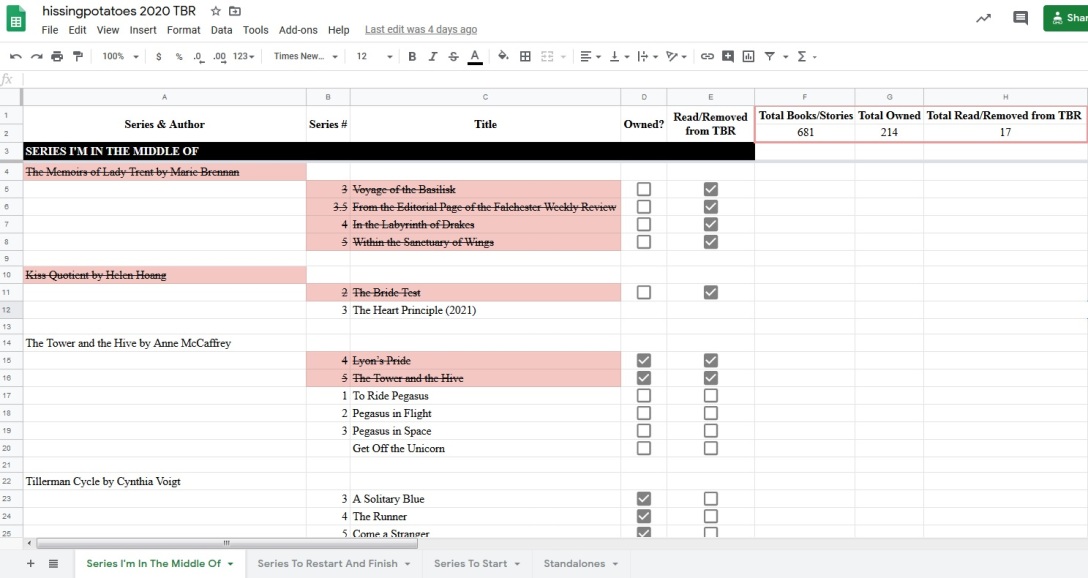 Today I’m talking about my 2020 TBR and getting nerdy with spreadsheets and checklists. 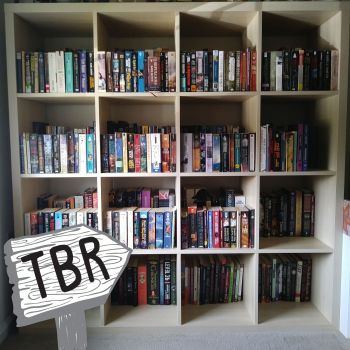 Over the years I have collected many, many books that I wanted to read from used bookstores and library sales and that sort of thing, to the point that it’s grown unwieldy as a collection. It’s gotten better in the last couple years, either because I’ve read some of the books or I’ve just unhauled books that I’m no longer interested in reading, but I still have multiple sections of books in my apartment, one of which is dedicated solely to books that I need to read. It’s kind of a pending section, and it’s making me anxious now to clean it out and either move it into an unhaul box or to put it onto my shelf of pride with my favorite books.

In order to help me do that, I have created a spreadsheet in Google Drive to help me. I’ve realized over time that checklists are a really great way to help me get through things. I’ve used them at work primarily, and then I had a breakthrough: checklists work for me at work, so why not use them at home and for my reading too?

So I’ve created this spreadsheet to help me get through my TBR. It has four tabs at the bottom. The first is for Series I’m in the Middle Of, because for some reason I start a series and then move on to other series and don’t finish it. These are the books that I’m prioritizing now at the beginning of the year so that I’m not constantly starting something new without finishing something that I’m enjoying.

Listed in the spreadsheet in columns A, B, and C are the series title and the author and then the breakdown by book number, including those little in-between short stories that the author has written. I’ve taken all this information from Goodreads. It might change as I get into the series or if the author releases something new, but the spreadsheet is flexible enough to handle that.

Next I have column E to check off a book when I finish it. When I check it off, it’ll automatically highlight and strikethrough the book to indicate that I’ve read it. And it also updates the totals at the top.

Right now I own 214 books that are on my TBR shelf, and when I added all of the books in a series along with these other 214 books, the total is 681 that I theoretically have to get through before I can call my TBR shelf empty. Now the likelihood is that I’m going to end up reading some of these books and starting some of these series and not liking them, so I’m just going to check them off that I’ve removed them from my TBR. I might not have read them, but I don’t intend to anymore because I didn’t like the first book or whatever the reason might be, but I’m still going to count it as a win.

Checking off that Total Read/Removed from TBR box in column E will show my progress in column H. If I end up buying a book, the total owned will go up in column G. So listed on this tab are all the series or authors that I’ve started and want to continue that I am prioritizing for the beginning of the year so that I can mark them done, they’re not on my mind, and I can complete the series before I end up forgetting everything and having to start over.

Those kind of series are in the second tab, Series to Restart and Finish. There’s not too many on here, but I have read at least the first book or volume of these series at some point, and it’s been so long that I need to go back and reread that before I continue and finish this series.

The totals at the top are persistent. If I check off a box in Series to Restart, it’ll update the totals in all of the other tabs.

The third tab is Series to Start, and there’s a lot on this list, especially by Anne McCaffrey. I’ve picked up her books over the years because I like those old-time sci-fi covers, and then I realized as I was making this spreadsheet just how many series she has and how long some of them are. So Pern’s going to be fun. 🙂 I have the first book by Alex Archer in the Rogue Angel series and did not realize that there were 60 books in the series. So we’ll see how much I enjoy that. If you scroll down this tab, you’ll see there are lots of books. LOTS.

And then the last tab is Standalones that are on my TBR shelf that I hopefully will get to at some point. They’ll be good to read in between series when I need a break from large fantasy or sci-fi epics.

Obviously these are not all of the books that I own. This is focusing primarily on that one section, that one shelf of TBRs that’s pending in my mind. There are plenty of books that I want to reread because it’s been a long time, but I will prioritize those in later years.

With 681 potential books and stories to read, if I actually read every single one of them it’s going to take me a good five years to get through, at the very least. Last year I read 150 books, 27-ish of which were DNFs. The 150 number was the biggest number that I’ve ever read of all the years that I’ve been tracking, so it’s definitely going to take a while for me to get through all these.

But having a spreadsheet and having the checklist gives me that motivation to do it and a focus not to just check out different books from the library and continue on into new series before I finish anything else.

And that’s my goal for 2020 and probably the next five years or so. You can follow along with me during the year and see what my progress is, and if you’re interested in using any of this data, you can download the spreadsheet to your own computers.

Let me know down in the comments if you recognize any of these books, if you’ve done anything like this before, or if you’re maybe thinking of doing it for your TBR!